Lessons That world seems so foreign to me.

“That world seems so foreign to me.” 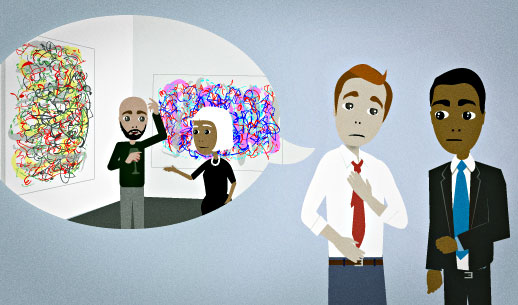 Your brother-in-law is a well-known artist who has an art show going on in a gallery now. You're telling a coworker about him. But you don't know much about art, so you say this.

That world seems so foreign to me.

Some industries and areas of interest can be called "worlds". Each different "world" is not only a type of business, but also a way of life

For example, "the Art world" means artists, art buyers, art gallery owners, museums, art magazine editors, and so on. It also includes their parties, their topics of conversation, the types of places that they live, and so on.

Other examples of "worlds" based on industries or interests are:

(something) seems foreign to me

This phrase describes something that you don't know much about, don't understand well, and can't even imagine clearly. For example:

The idea of waiting until you're in your late 30's to have a child seems so foreign to me.

I've been a vegetarian for so long now that the idea of eating meat seems completely foreign to me now.

This doesn't mean that these things seem like they're from a foreign country; it means that they're "foreign concepts". A foreign concept is an idea that seems strange and hard to understand.

“When was the last time you got a haircut?”

“The next thing I know, I'm sprawled out on the floor.”