Lessons The next thing I know, I'm sprawled o...

“The next thing I know, I'm sprawled out on the floor.” 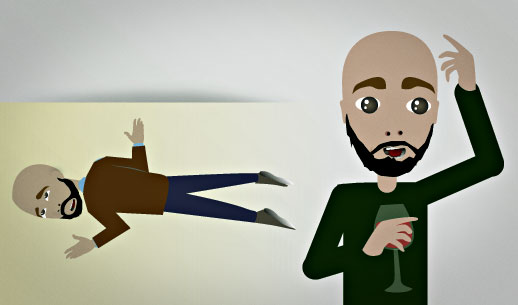 You're at a party. You're telling a funny story about a time when you tripped on your son's toy car. You've described what you were doing before you tripped on the toy, and how you tripped on it. This is how you end your story.

The next thing I know, I'm sprawled out on the floor.

The next thing I knew, (sentence)

I was riding in the back seat. I must have fallen asleep, because the next thing I knew, we were stopped at a rest stop and Celine was tapping me on the shoulder.

Eddie and I were doing tequila shots at the club. The next thing I knew, I was laying on Eddie's couch with a splitting headache.

You can also use "the next thing I know" if you decided to do something, but now you don't really remember why or how:

Jimmy and the boys called me from Las Vegas and told me to come down. So the next thing you know, I'm on a plane to Vegas, and all I've got with me is one change of clothes and a tooth brush.

I wanted to get a meeting with the vice president, so I called him at his office. His secretary answered the phone, and I told her why I wanted to meet with him. She says, "I'm sorry, but Mr. Liebowitz isn't taking any sales meetings right now." So I tell her, "No, this isn't a sales meeting. I just want to get his advice on a new product that my company is building."

Being "sprawled out" means that you're laying down with your arms and legs stretched out wide. It looks like your body is in an "X" shape.

A: Last night you were sprawled out all over my side of the bed.

A: I tried to roll you over, but you wouldn't move.

accident laying the past telling a story
Print this Lesson

“That world seems so foreign to me.”