Lessons The Earth's axis is tilted.

“The Earth's axis is tilted.” 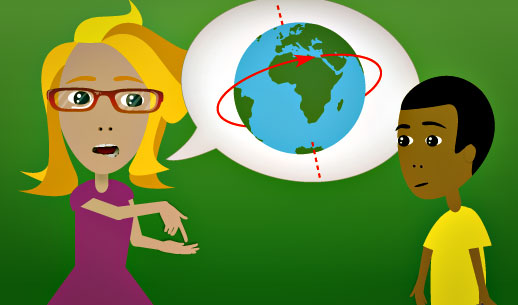 You're talking to a child and explaining why there are different seasons. This is how you begin your explanation.

The Earth's axis is tilted.

An "axis" is an imaginary line that something turns around. For example, a wheel has an axis which is the middle of the circle.

The Earth's axis is an imaginary line through the middle of the Earth from North to South. The Earth spins around this line.

"Axis" is a technical and mathematical term, so it's most often used with other technical words. Here are some examples:

Something that is "tilted" isn't straight up and down. It leans to the side a little bit. Things that can be tilted include:

Notice that "tilted" is different from "crooked" or "curved". These words both also mean "not straight", but in different ways:

“He's past his prime now, but he was a great player at his peak.”

“Can you go grab a jar of pasta sauce from the next aisle?”