Lessons There's a bug buzzing around my head!

“There's a bug buzzing around my head!” 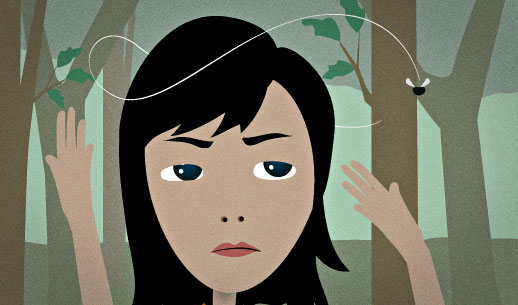 You're hiking in the woods. A fly keeps flying around your head while making a noise. Annoyed, you say this.

There's a bug buzzing around my head!

Use "there's ___" when you're describing a situation that's happening now:

There's someone at the door.

There's some food in the kitchen, if you're hungry.

Or something that's planned for the near future:

There's a game coming on at four.

It's also common to describe what something is doing using "there's":

There's a woman staring at you over there.

There's a humming noise coming from the refrigerator.

There's some cake sitting on the counter.

A "bug" is an insect, like a fly, mosquito, ant, grasshopper, etc.

What kind of bug is that?

The word "insect" is more formal and a little more scientific-sounding than "bug".

"Buzz" is a word that describes a sound. "Buzzing" is a kind of medium- to high-pitched noise that is made by:

In addition to describing a sound, "buzz" can also describe the action of an insect flying around while making a buzzing noise.

“I've gotten a lot of positive feedback on it.”