Lessons This guy is taking up the whole armrest!

“This guy is taking up the whole armrest!” 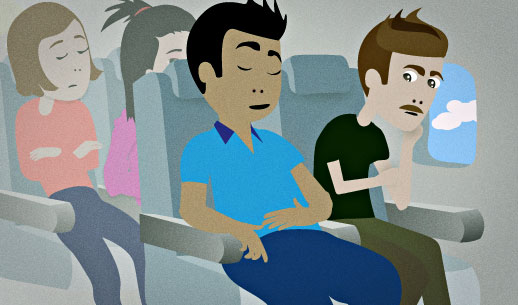 You're on an airplane, sitting next to a stranger. He's big. His arm is on the armrest between you. You think this to yourself.

This guy is taking up the whole armrest!

A "guy" is a man. The word "guy" is informal. It sometimes carries a feeling of annoyance or dislike for a person, like in the example above. Here's another example:

I was having a conversation with Sarah, and this guy came up and said "Hi" to her.

If I was listening to a story that began this way, I would think that the speaker didn't really like the guy that she's talking about.

take up (a space)

To "take up" space means to fill the space. As a result, other people or things can't use the space.

Why don't you get rid of that stuff? It's just taking up space.

Move over! You're taking up the whole bed.

As you can see, the phrase "take up the whole ___" is a common phrase.

Computers back then used to take up a whole room and had less processing power than today's cheapest cell phones.

The "armrest" on a chair is the part that sticks out on the side of some chairs. It's meant for you to rest your arms on.

Airplane seats always have armrests, but there's only one of them that two people have to share.