Lessons This is the Cougars' fifth straight l...

“This is the Cougars' fifth straight losing season.” 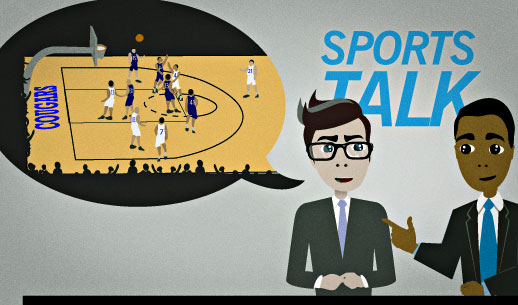 You're watching a sports news show. The announcers are talking about a basketball team which has not been very good for the past few years. One announcer says this.

This is the Cougars' fifth straight losing season.

Words that are plural end in "-s":

a foreigner / some foreigners

Words that are possessive end in "-'s":

And words that are both plural and possessive end in "-s'":

This is all in written English. In spoken English, all of these variations sound the same.

the fifth straight (something)

This phrase is very useful for talking about numbers and records which are interesting and unusual. It's most common for sports- and economics-related discussions.

This is their third straight national championship.

The stock market fell for the 20th straight day today.

When you're talking about something that's no longer current, use "___ straight" instead of "the ___th straight":

They've had four straight losing seasons, but they're hoping that this year will be different.

Sports are played in "seasons". A season starts and ends at certain times of year. For example, in the U.S., the Major League baseball season starts in April and ends in October.

Teams keep track of how many games they win and lose in each season. A "losing season" is a year in which the team loses more games than they win. The opposite is a "winning season".

“I would have guessed that you were in your mid-twenties.”

“I'm all for moderation, but this is ridiculous!”