Lessons Watch out! Your fingers are going to ...

“Watch out! Your fingers are going to get caught in the door.” 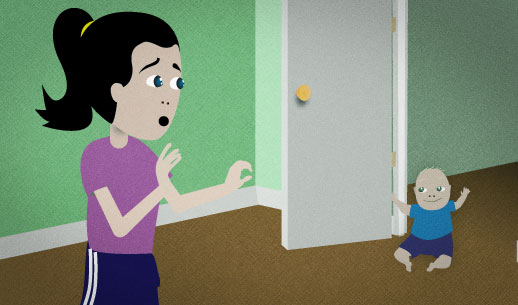 Your young child is playing with the door, opening and closing it. You're worried that he's going to hurt his fingers. You tell this to him.

Watch out! Your fingers are going to get caught in the door.

Yell this when you want someone to be careful. You can also say "Look out". "Look out" seems to be more specifically for immediate danger, while "Watch out" can be for things that aren't happening now. For example:

Watch out. You don't know if he's trustworthy or not.

(something) gets caught (somewhere)

When something "gets caught", it means that it's not able to move freely. For example, if you're wearing headphones while you walk through a doorway, the wire might "get caught" on the doorknob. If you try to keep walking, the doorknob will pull the wire. Wires, clothing, hooks, ropes, and handles can all "get caught" on something. Here are some sentences that use "get caught":

A: Pull it tighter.

B: I can't! It's caught on something.

Her shirt got caught on a nail that was sticking out and ripped a little bit.

In this example, "in the door" means in the space between the door and the doorway. This is the way to talk about something that gets hurt or stuck by a closing door:

B: I slammed my thumb in the car door.

get at home passive verbs warning someone
Print this Lesson

“Don't make me pull this car over!”

“We made a down payment on a house today!”