Lessons We have a few shows coming up later t...

“We have a few shows coming up later this month.” 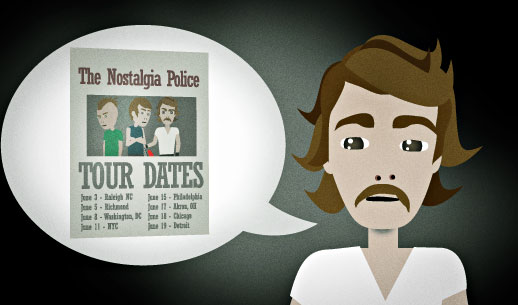 You're watching a TV talk show. The lead singer of a rock band is being interviewed, and the host asks what the band is doing in the near future. This is the musicians reply.

We have a few shows coming up later this month.

have (something) coming up (on a certain date)

The phrase "___ is coming up" means that something is scheduled, and is going to happen soon:

Sorry, I can't. Final exams are coming up in a couple of weeks.

Our anniversary is coming up soon.

The final deadline is coming up at the end of this month.

These examples are all about events that are scheduled for a certain day. But you wouldn't use "coming up" to talk about things that you're not sure about, like an earthquake.

When a band plays live music in a concert hall, club, arena, or other place for fans, it's called a "show".

You can also call shows "concerts":

We have a few concerts coming up later this month.

But "concert" doesn't sound as cool as "show", so fans and musicians who want to seem cool and young are likely to use the word "show". Classical performances and large, commercial events are more likely to be called "concerts".

You can explain when something is going to happen this way:

If today is Monday, "later this week" might be Wednesday, Thursday, or Friday. If today is Friday or Saturday, you probably won't use this expression.

concert music have
Print this Lesson

“We'll pass that along as soon as we have it.”

“Where do you see yourself in 5 years?”