Lessons Yeah, but then it'll be blocking one ...

“Yeah, but then it'll be blocking one of the outlets.” 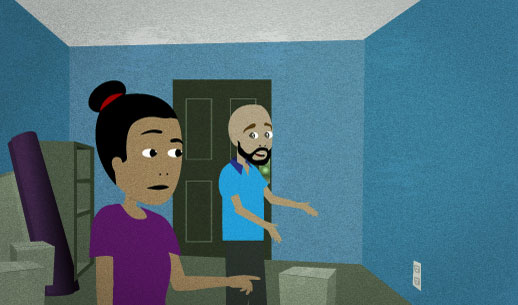 You're moving into a new apartment and trying to decide where to put your furniture. Your roommate suggests a location for the couch, but you don't think it's a good spot. You say this.

This is a common way to disagree with someone:

A: You said that I could use it when you were finished with it.

B: Yeah, but I'm not finished with it yet.

A: What's wrong with him? He's smart, funny, handsome.

"Yeah but..." is useful when you agree with the specific sentence that a person said, but you disagree with their overall ideas.

then (something) will (do/be something)

People use "then" to finish a sentence like this:

If you put the couch here, then it will be blocking one of the the outlets.

"Then" shows the result of a possible action. Sometimes people leave out the first part of the sentence, so it turns into this:

Then it will be blocking one of the outlets.

You can complete the sentence with a verb like this:

A: Let's ask the professor for an extension.

B: No! Then she'll know that we've just been slacking off.

Or you can complete the sentence with "be + adjective":

I thought about going for a run, but then I'll be all hot and sweaty.

When one thing is "blocking" something else, it means that the 2nd thing can't be reached or used because the first thing is in its way.

Damn it! Someone's blocking my car. I can't get out of the driveway!

Oh, I'm sorry. Am I blocking your view?

An "outlet" is a hole that you plug a machine into, to get electricity.

People also call them "electrical outlets". Some people call them "plugs" too, although technically the "plug" is what you put into an outlet.

will 日本語 after
Print this Lesson

“Sorry, I can't hear you. Why don't you text me instead?”