“Yeah, he's a real stickler for following the proper chain of command.” 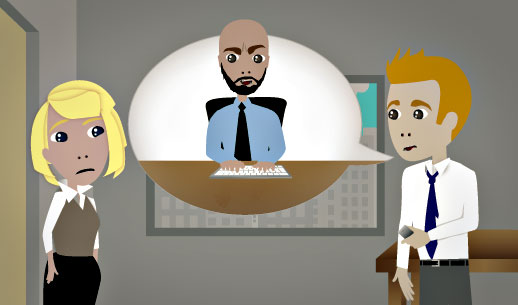 At work, your coworker is complaining because she got yelled at by the manager of the tech support department. She sent an e-mail to one of the tech support staff directly instead of going through the manager. You've been yelled at by this person in the past, so you have some experience dealing with him. But you don't want to say anything too bad about him. So you say this.

Yeah, he's a real stickler for following the proper chain of command.

a stickler for (doing something)

A "stickler" is someone who insists that everyone follow the rules. You can express what kind of rules the stickler makes people follow with the phrases "stickler for ___" or "stickler when it comes to ___":

My boss is a stickler when it comes to correct spelling and grammar.

She's a stickler for punctuality.

The correct preposition to follow "stickler" is "for", but sometimes people use "about":

I'm a real stickler about keeping the kitchen clean.

The word "stickler" sounds a little negative, but it's not rude or offensive.

The "chain of command" is the rules for who's in charge of who in a company, a government department, the army, etc. In other words, it's the structure of relationships between superiors and subordinates, like bosses and their employees.

The phrase "chain of command" comes from the military, where there are strict rules about who is higher up (generals, etc) and lower (privates, sergeants) in the organization. The order is supposed to be like a chain from lowest to highest:

To "follow" the chain of command means to follow the rules about who is allowed to make different decisions in an organization.

"Proper" means "correct". "The proper chain of command" means "the official rules for who to ask for help".

Use the word "proper" to contrast with doing things in a messy, unprofessional, or untraditional way. For example, if you just eat a piece of pastry for breakfast, someone might tell you:

You need to eat a proper breakfast.

“Do you have an upset stomach?”

“My glasses are fogging up.”