Lessons You could cause permanent damage to y...

“You could cause permanent damage to your ears, you know.” 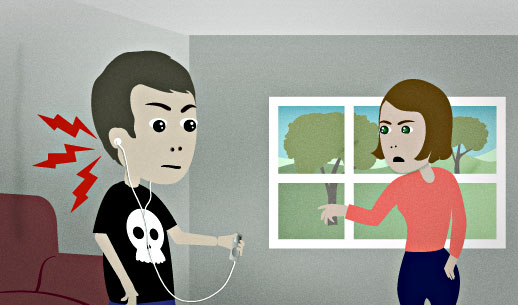 Your teenage son is listening to music on his earphones with the volume really high. You can hear it from across the room. You say this to get him to turn the music down because you're worried it will hurt his ears.

You could cause permanent damage to your ears, you know.

you could (do something)

This is one way to explain the future consequences of what someone is doing. Use this phrase when you want to warn someone to stop doing something bad:

Get down from there. You could fall.

Are you crazy? You could lose your job doing that!

It's not safe to exercise that hard when you're not used to it. You could injure yourself.

cause permanent damage to (something)

When something is "damaged", it means that it's broken, messed up, or isn't working as it is supposed to. "Damage" is the noun form:

Obviously, heavy drinking can lead to liver damage and so on.

To "cause permanent damage" to something means to break it in a way that it can't be fixed. In the example above, the mother is worried that her son will permanently hurt his hearing.

Add this to the end of a sentence when you're telling someone information that you don't think they know yet. In the example above, the mother doesn't think that her son knows how dangerous listening to loud music can be for his hearing.

You can also use "you know" in this way at the beginning of a sentence:

anger health modals warning someone a teenager could
Print this Lesson

“Actually, can I get plastic instead?”