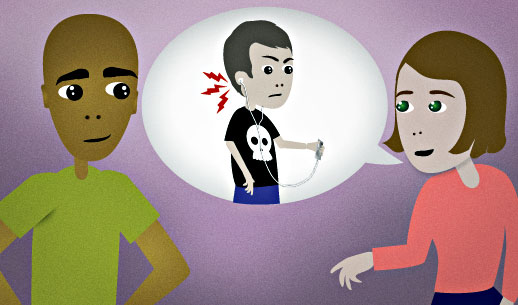 You're talking to a friend about your teenage son. In the past few months, your son has been starting to listen to loud and aggressive music. He wears dark clothes and acts angry a lot. But you're not too worried because you think it's normal for his age. You tell this your friend.

(someone) is going through a (adjective) phase

When someone's behavior changes for a few years, you say that they are "going through a ___ phase".

To understand "phases", you can think of the moon. Sometimes the moon is full, sometimes it's half full, and sometimes it's completely dark. But you don't worry when the moon is dark because you know that it's a normal and natural event which will change again soon. We call the moon's appearance at different times "phases".

In the same way, people naturally change as they get older. When children are between 3 and 4, they enter an "inquisitive phase" (a time when they like to ask a lot of questions). Most kids between 11 and 14 go through an "awkward phase" in which they don't seem comfortable because they're not children anymore but not yet teenagers either. And a lot of people between age 15 and 25 go through a "wild phase" when they like to drink, party, and date lots of different people.

If you say that someone is "going through a phase", it sounds like you think that they will soon stop acting the way that they're acting:

Don't worry about it. He's just going through a phase. He'll grow out of it.

People call things "little" that they don't respect very much. For example, if someone who you go to school with threw a party but didn't invite you, you might angrily say:

I guess I wasn't invited to her little party.

Here's an example from a previous PhraseMix lesson:

Sorry, I've been in my own little world lately.

Teenagers often try to do the opposite of what their parents want. This is called "being rebellious".

“You could cause permanent damage to your ears, you know.”