Lessons The only thing about fish is that it'... 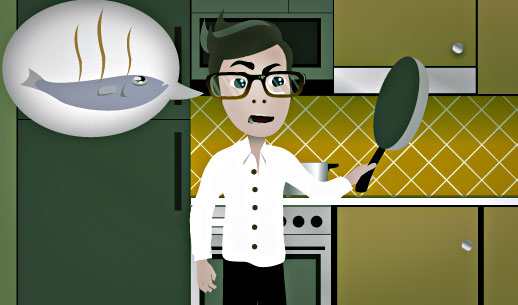 Your wife cooked some fish for dinner. It was good, but now you're trying to clean the dishes. You've tried to wash away the smell of the fish. You say this because the smell is still there.

The only thing about fish is that it's so hard to get rid of the odor.

The thing about (something) is (clause)

The thing about the current political administration is that they're all talk and no action.

The one thing about Lacey that annoys me to no end is that she's never had any hands-on experience, yet she seems to think that she knows everything about it.

You can also use "The thing about ___ is ___" in other situations where you're not complaining. You can also use it to introduce a positive or interesting point about something. For example:

The thing about my Uncle Frank is that, once you get to know him, he's really nice and very loyal.

The thing about college is, you don't really learn very much that you couldn't learn on your own by reading a few books.

get rid of (something bad)

The word "odor" means "smell", but it's usually a bad smell. Examples of things that get called "odors" are: