Lessons You need to take the express train.

“You need to take the express train.” 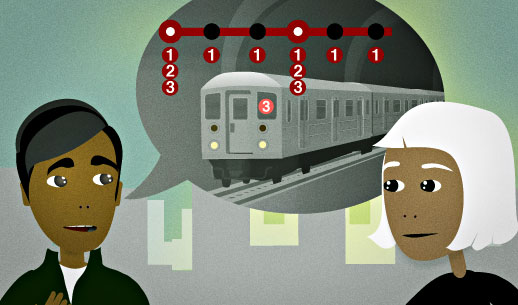 Your mother is visiting you from out of town. She wants to go to a museum while you're at work one day. You have to explain how to get there by train, so you start by saying this.

You need to take the express train.

You can "ride" a train, or you can "take" a train. What's the difference?

I love riding the train in the middle of the day when it's not crowded.

I was riding the train, and this guy next to me started telling me a story about how he had just gotten out of prison.

As I was riding the train home, I realized that I'd left my keys in the closet at work.

You use "take" when you want to talk about how you get somewhere:

Just take the #3 train to 72nd Street and I'll meet you there.

Do you think it'll be faster to take the train or try to catch a bus?

An "express" train is supposed to go faster than a local train because it doesn't stop as often. The express train stops at more major stops.

"Express" means "fast" in a few other phrases:

riding a train a guest
Print this Lesson