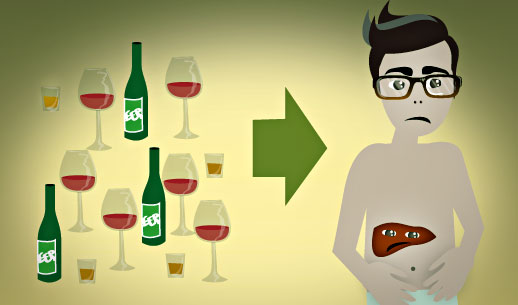 You're discussing your drinking habits with a friend. You've just explained that you like to have a drink every night with dinner because it's good for your health. But you don't want your friend to think that you drink a lot, so you say this.

Obviously, heavy drinking can lead to liver damage and so on.

This means "I know this is true, and I'm sure you know it too." Use it when you say something that the people listening already know.

Obviously, changing careers is not easy, but it is possible.

"Heavy" drinking means drinking a lot of alcohol. You can also call a person "a heavy drinker":

Growing up, my dad was a heavy drinker, so there were times when my mother would kick him out of the house for a few weeks or months.

(something) can lead to (something else)

When one action "leads to" another action, it's similar to causing something to happen. But it happens over a long period of time (months or years). This phrase is useful for talking about health problems:

Obesity can lead to heart disease.

It can also be used to talk about scientific research:

We're hoping that our research will lead to improved cures for victims of skin cancer.

Carbon dioxide emissions have already led to an increase in the world's average ocean temperatures.

When something is "damaged", it means that it's broken, messed up, or isn't working as it is supposed to. "Damage" is the noun form.

Permanent damage that occurs in a certain part of your body is called "__ damage":

The doctor suspects that there may be brain damage.

It contains a chemical that is known to cause nerve damage and irregular heartbeat.

"Liver damage" is a common health problem for people who drink too much for many years.

"...and so on" is similar in meaning to "etc." ("et cetera"). It means that there are more things that you could add to a list, but you're not going to say all of them.

Heavy drinking can lead to liver damage and so on.

... the speaker means that drinking can lead to liver damage as well as other health problems.

“You need to take the express train.”