Lessons Do you mind if I ask what your ethnic...

“Do you mind if I ask what your ethnic background is?” 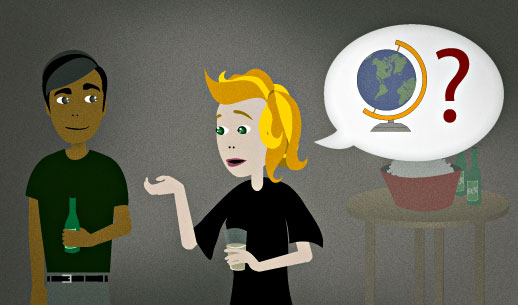 You're talking to a guy at a party. He speaks with a normal American English accent, so you think that he grew up in the U.S. But you're curious what country his parents or other ancestors came from. You ask this.

Do you mind if I ask what your ethnic background is?

Do you mind if I ask (a question)

This is a way to carefully ask a question that you're worried might be rude, but that you want to know anyway. For example, if you're visiting someone's nice apartment and you want to know if you could afford a similar one, you can ask:

This is a really nice place. Do you mind if I ask how much you pay per month?

The question that follows "Do you mind if I ask..." is in this format:

In countries like the U.S. that have a lot of immigration, asking "Where are you from?" can sometimes be complicated. For example, a person might have been born and raised in the U.S., but his parents might be from Germany. So if you want to know what a person's family background is, it's not enough just to ask "Where are you from?" Instead, you should ask the question above:

However, you should also know that there are a lot of native English speakers who confuse "ethnicity" and "race". In common use, "race" describes a few major divisions of people that are mostly based on skin color. The major groups that most English speakers would think of as different "races" are:

A lot of people would also add these categories as "races":

Of course, these groups are not very accurate and don't have any scientific basis. But it's good to know about the popular definition of "race". People who are not very well-educated may ask about your background this way:

What race are you?

This is an impolite and disrespectful way to ask, in my opinion.

“To make matters worse, one of the books I need is checked out.”

“Hopefully it won't come to that.”