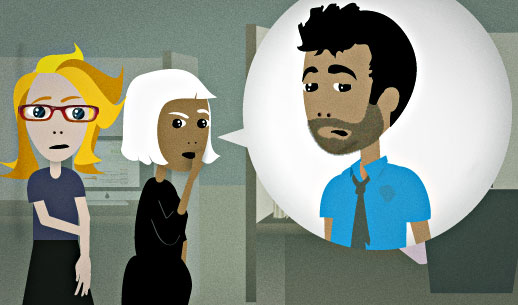 One of your coworkers came to work today with a dirty shirt. His hair is also uncombed and he has a little bit of stubble. You're talking with a coworker about him. You say this.

Use this to comment on how someone looks, especially when it's different than before.

Have you seen any recent photos of Steve Jobs? He's looking pretty weak.

This phrase is just used in spoken English.

The word "scruffy" is funny because it's almost always used to describe either men, or dogs.

A "scruffy" man has messy hair, hasn't shaved, or has wrinkled clothes. But you wouldn't call someone who was really messy-looking, like a homeless man. A "scruffy" guy is just a little bit messy-looking.

A scruffy dog might look like it hasn't taken a bath in a long time. Its hair is long and probably hasn't been cut recently.

It's possible to call a woman "scruffy", but it's very rare.

Remember that a tag question at the end of a sentence needs to match the verb:

He's older than you, isn't he?

They're from England, aren't they?

You left a bit earlier, didn't you?

“Do you want to borrow my clippers?”