Lessons Everything is really blurry. I can't ...

“Everything is really blurry. I can't even make out what that sign over there says.” 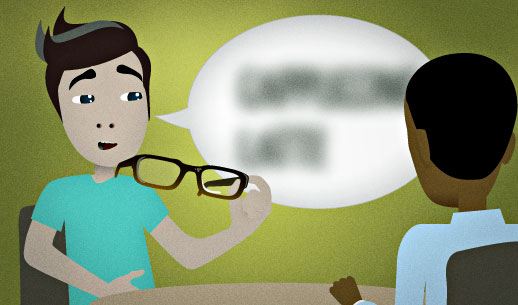 You're chatting with a friend in a cafe. You start to talk about your glasses. Your friend asks how well you can see without them. You take off your glasses and say this.

Everything is really blurry. I can't even make out what that sign over there says.

When something is "blurry", it means that you can't clearly see the edges of it. Things might look blurry in situations like these:

"Making out" something means being able to see or hear it, even though it's difficult to see or hear. "Make out ___" is often used in the negative form:

I heard them talking about me, but I couldn't quite make out what they were saying.

I can't make out your handwriting. What does this say?

Can you make out how many of them there are?

It was really dark out, but Ralph was able to make out what they were doing.

When you're using "it", "them", "one", or other short words like these as the object, "out" comes afterward:

I can't make it out.

Be careful. When you just use "make out" without any object, it means to kiss someone heavily!

that (something) over there

Use this phrase when pointing to something that's beyond arm's length away from you.

what (some writing) says

English speakers use the word "says" to talk about things that are written somewhere, even though we can't actually hear written English. For example:

What does the note say?

The instructions say to take two tablets every four to six hours.

“You should have seen the look on his face. It was priceless!”