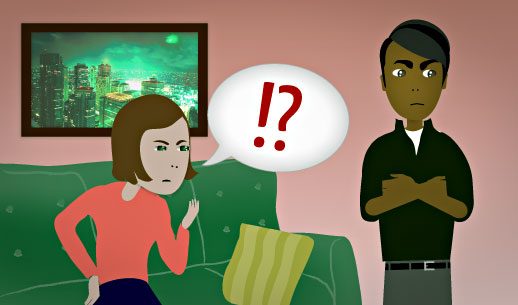 Your boyfriend was being rude to you and seemed angry, but you don't know why. You asked him a question but he didn't answer or give any response. Now you're angry and you want to make him answer your question. You say this.

You already know that people say "Excuse me" when they do something rude to someone. But we also say "Excuse me!" to people when they are rude to us. For example, it's normal to say it when:

If you ask someone a question, and you're sure that they heard you, but they don't answer, you can say "Excuse me!" because that's rude.

The meaning of "Excuse me!" in these situations is something like "You need to say 'Excuse me' to me." When people say it in this way, they pronounce the words with more stress. It sounds like a statement rather than a question. The speaker might also make an angry face with raised eyebrows.

anger having an argument
Print this Lesson