Lessons He throws a mean curveball! 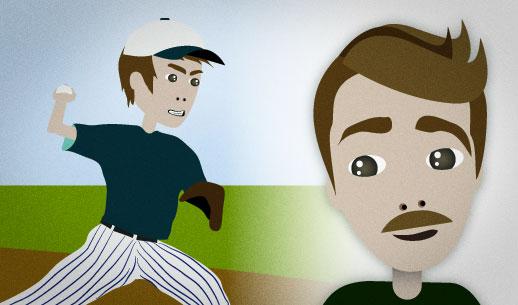 You have a nephew who's in high school. You're proud of him because he's a good athlete, and the pitcher on his school's baseball team. You say this, bragging about him to a friend.

He throws a mean curveball!

(someone does) a mean (something)

In the example above, the speaker wants to say that his nephew can throw curve balls really well. You can use the phrase "___ a mean ___" when you want to talk about something that a person is quite good at:

I bake a mean apple pie!

He plays a mean game of chess!

She does a mean James Brown impression.

"A mean ___" sounds kind of tough and cool. That's because the word "mean" in this phrase is the version that means "not nice" or "cruel".

A "curve ball" is a kind of pitch in baseball. When you throw a curve ball, the ball doesn't travel in a straight line; it curves downward as it gets close to the batter. That makes the ball hard to hit.

There's also a metaphorical meaning of "curve ball". People use it to talk about anything that was unexpected:

Don't be surprised if they throw you a curve ball in the interview; they just want to see how well you respond under pressure.

In this example, a "curve ball" means an unexpected question.

“I don't want to burn any bridges.”