Lessons I can tolerate the heat, but what I c... 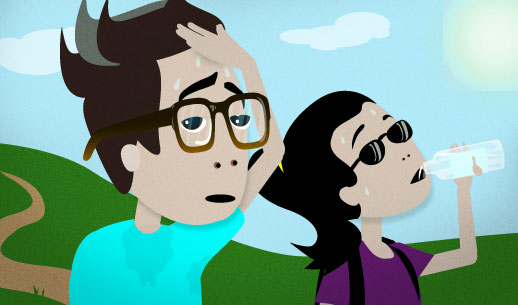 It's a hot day and the air is really humid, so you're sweating a lot. You say this while walking outside.

I can tolerate the heat, but what I can't stand is this humidity!

I can tolerate (something)

If there's something that you don't like, but you're able to accept it reluctantly, say "I can tolerate ___":

A: Do you eat shrimp?

When you use the word "tolerate in a negative sense, though, it has a stronger meaning. You use "can't tolerate ___" to talk about things that you not only dislike, but also make you angry:

I can not tolerate laziness.

I can't tolerate people who brag.

As in these examples, "can't tolerate ___" often describes people's behavior.

(someone) can't stand (something)

Talk about something you don't like at all with the phrase "I can't stand ___":

I can't stand being apart from you for so long.

I can't stand to see an animal in pain.

You can talk about other people with this phrase as well:

She can't stand it when people talk while they're chewing their food.

It's not that common to use "stand" this way in positive sentences. Instead of saying that you can stand something, say that you can "tolerate" or "handle" it:

B: Yeah, it's not my favorite but I can usually tolerate it.

what (clause) is (something)

The example at top could also be said this way:

I can tolerate the heat, but I can't stand this humidity!

Using "what I can't stand is ___" places more emphasis on the thing that the speaker doesn't like. It makes the sentence sound like a more forceful complaint. Here are some more examples:

I'm OK with working late hours from time to time. What I don't like is my boss expecting me to do that with no overtime pay and no appreciation for my effort.

I don't want to hear your excuses. What I want from you is an apology.

"Humidity" is the amount of water that's in the air.

People like to compare the "heat" and "humidity" of the air, because air that's hot but dry isn't as bad as hot and humid air.

“There you go. You should be up and running now.”