Lessons There you go. You should be up and ru...

“There you go. You should be up and running now.” 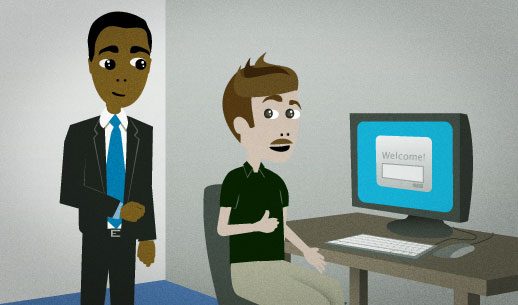 You work as a computer tech support specialist. You're installing a piece of software on someone's computer. Now the software has finished installing, so you're ready to let him use the computer again. You say this, giving him use of his computer again.

There you go. You should be up and running now.

You say "There you go" when you're giving or handing a person something:

A: Can you pass me a napkin?

More generally, you use it when you're doing something for another person. For example, say "There you go" when:

You can also say "Here you go" in the same way. There are no absolute rules for when to use one or the other, but I would use "Here you go" if I brought something to them from far away, and "there you go" if I'm sitting in one place and handing them the object.

(something) should be (adjective)

Sometimes people talk about their guesses with "should". Use "should" to talk about something that you strongly think is true, but you're not completely sure of:

They should be there at the airport to meet us.

This should be pretty easy.

If we all pitch in and help out, it shouldn't take too long.

(something) is up and running

Use this expression to talk about things that are now working and ready to use. Here are some things that you can describe as "up and running":

In the example above, the speaker says "You should be up and running." However, what he means is:

The software should be up and running now.

"You should be..." sounds more casual and friendly.

“He said it so matter-of-factly, I didn't know what to make of it at first.”