Lessons I watched a few episodes, but I could...

“I watched a few episodes, but I couldn't really get into it.” 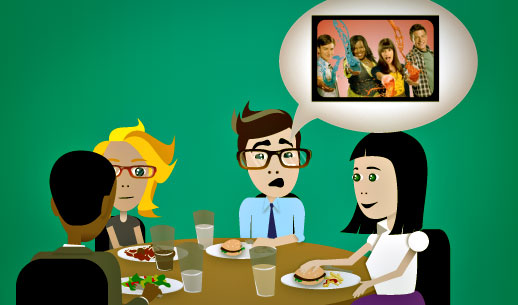 In a conversation with a group of coworkers, someone said that she loves the TV show "Glee". You watched "Glee" 2 or 3 times, but didn't think it was very interesting. You say this to express your feelings about the show.

I watched a few episodes, but I couldn't really get into it.

Talking about a "TV show" can be confusing. "A show" might mean the entire continuing series, or just one 1-hour or 30-minute part of the series. "Episode" is a more specific word for one part of a show that airs on a single day. Here are some other specific words for TV shows:

So each series has one or more seasons. Each season has several episodes (usually 10-20).

When you're talking about things that you do for entertainment, use the phrase "I'm into ___" For example, if you want to ask someone about their hobbies, it's strange to ask "What are your hobbies?" Instead, I'd ask:

What kind of stuff are you into?

Or, for a more specific question:

What kind of music are you into?

"Get into ___" means to start being into something:

I first got into tennis when I was about eight years old. My sister was on the junior high school tennis team, and I started practicing along with her.

I couldn't get into it.

This means that you tried to be interested in something, but it didn't work. Use it to talk about books, movies, TV shows, plays, etc.

“I'm just gonna kick back with a cold drink and watch the game. You?”