“I'll tell you what I'll do: I'll give it to you for seventy-five hundred, and I'll throw in the cover and helmet for free.” 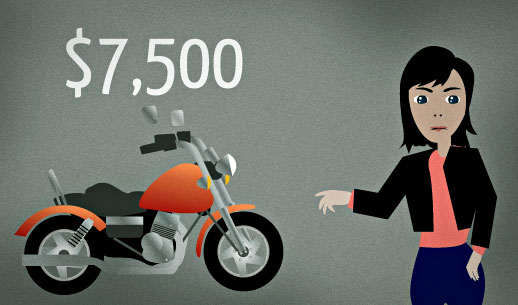 You're trying to sell your motorcycle. Someone offered to pay you $7,000 for it, but you wanted to get $8,000 for it. You say this as the two of you negotiate the price.

I'll tell you what I'll do: I'll give it to you for seventy-five hundred, and I'll throw in the cover and helmet for free.

This phrase is used to introduce an offer that you make to someone. It actually makes the offer sound very generous and special. For example, if a teenager is begging you for help finding a job, you can answer like this:

I'll tell you what I'll do: I'll give my friend at the community center a call and see if they have any openings.

A: How much do you want for it?

A: I understand, but I just can't go that high.

B: OK. I'll tell you what I'll do: I'll give it to you for seventy-five hundred, and I'll throw in the cover and helmet for free.

I'll sell it to you for seven thousand five hundred dollars.

This is the more formal way to say it.

When you're trying to sell something to people, you can offer to "throw in" something extra. "Throwing in" something means to offer extra stuff without raising the price. For example:

If you buy two pairs at the regular price, we'll throw in a third pair for free.

What about if I throw in an extra battery and memory card?

People use this phrase when they're negotiating with someone one-on-one to sell something. You can also hear it on some TV commercials.