Lessons I've disposed of it. 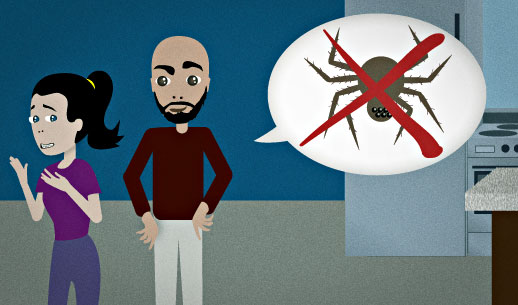 There was a spider in your girlfriend's kitchen. She was afraid of it, so she asked you to get rid of it. You killed the spider. Now you want to tell her that the spider is gone, but you don't want to sound too violent. You say this to lessen the situation.

I've disposed of it.

You should say that you "have done" something (instead of saying that you "did" it) in situations like these:

The example above falls into the last category. You girlfriend expected you to kill the spider, so now you're telling her that you've "done" it. If your girlfriend had never seen the spider, but you found it and killed it, you might say:

I saw a spider in your kitchen, so I killed it.

In that case, she didn't expect anything so you don't need to use "have (done)"

To "dispose of" something means to get rid of it. It can mean throwing something away in the trash:

All employees must learn the proper way to dispose of hazardous medical waste.

The nuclear industry has not found a way to dispose of radioactive waste and protect power plants from terrorist attacks.

Sometimes, like in the example at top, you can use the phrase "dispose of ___" as an indirect way to talk about killing something.

It can also mean getting rid of a dead body. For example, a gangster character in a crime film might say:

Is there a furnace where we can dispose of the body?