Lessons I've got to work off this beer belly! 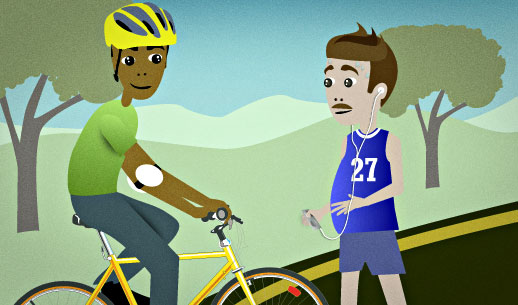 You haven't been exercising for a while, so you've gotten a little fat. Today you decide to go for a jog. You run into one of your neighbors. You say "hi" to him and then offer this explanation.

I've got to work off this beer belly!

To "work off" something means to work hard in order to make something go away. This phrase is used to talk about just a few subjects. One is getting rid of fat or weight by exercising:

I need to work off about 15 pounds before beach season!

Why don't we go for a little walk after dinner to work off some of those calories.

The other situation to use "work off ___" with is a debt or obligation:

It takes some graduates over 15 years to work off their college loans.

They have their way into the country paid for, and then have to work it off doing cheap labor.

How long did it take you to work it off?

Beer has a lot of calories. Drinking a lot of beer makes you fat. People call a large stomach that comes from drinking too much beer a "beer belly".

When I think of a "beer belly", I usually think of a person who isn't too fat, but whose stomach sticks out a lot. This is also called a "pot belly" because it's shaped a little bit like a pot that's sticking out of your stomach.

People usually think of a "beer belly" as being something that a man has. If you say that a woman has a beer belly, it sounds funny. Sometimes a woman will say that she has a beer belly as a joke, though.

When you say that someone has a "beer belly", it doesn't sound that negative. It kind of sounds cute, actually.

“Growing up, I had a strong Southern accent.”