Lessons James is, like, a hard core soccer fan. 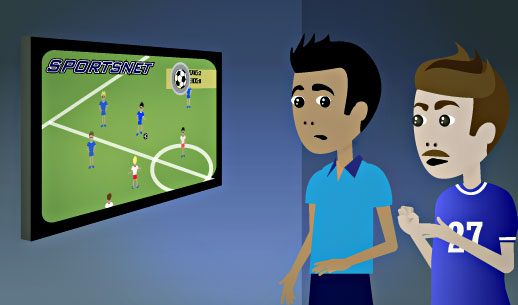 One of your friends' friends (James) is into sports and likes to watch soccer really seriously. You're talking about James with another mutual friend. You say this.

The word "like" is controversial in English. Some young people use it a lot while speaking, while other people think it makes those people sound stupid.

In the example above, the speaker uses "like" in the middle of the sentence to emphasize the word "hard core". Here are some more examples of that:

Something that is "hard core" is really strong and concentrated. For example:

Don't you think parents should have the right to protect their children from violent images and hard core pornography?

A "hard core fan" is someone who supports something really actively and with a lot of enthusiasm. If you never miss a game for your favorite sports team and have the names of all the players memorized, you're a hard core fan.

“As you can see, the advantages of the new site are, one, it's personalized.”

“She can come across as stuck up at first.”