Lessons My grandpa used to tell me about how ...

“My grandpa used to tell me about how he had to get up at the crack of dawn every day to start work on the farm.” 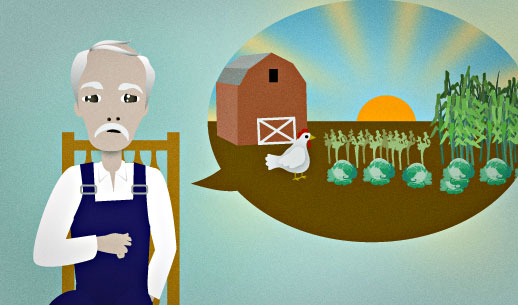 You're talking to your friend about people who are hard workers. Your grandfather worked on a farm when he was a boy. You tell your friend this about him.

My grandpa used to tell me about how he had to get up at the crack of dawn every day to start work on the farm.

(someone) used to (do something)

You can talk about things that "used to" happen if:

My friend Jeremy and I used to get together on the weekends and play Nintendo for hours at a time.

This is one way to talk about your grandfather.

When talking to someone in your family, you call your grandfather:

Each family has their own way of talking about grandparents, but these are some of the most common ones.

When you're talking about your grandfather to people who aren't in your family, you include "my" at the beginning:

Some of the less-common names for grandfathers sound silly when you're saying them to people outside of your family, so people mostly just use the two choices above. Also notice the difference in capitalization.

(talk about) how (sentence)

Usually, when you're talking about what people said with a word like "tell" or "talk about", you follow it with a noun:

He used to tell me about his farm.

If you want to explain an action, you use the "-ing" form of a verb:

He used to talk about waking up at the crack of dawn to work on the farm.

But what if you want to express a whole sentence that someone talked about? One way is with "how":

He told me about how he hated getting up so early every day.

He also talked about how his parents wouldn't let him go to school some days if there was too much work to be done around the farm.

Once, he told me about how his father didn't even know how to read.

get up at the crack of dawn

This idiom means "wake up very early in the morning". Literally, it means to wake up right when it starts to become light outside.

People usually talk about "getting up at the crack of dawn" when complaining about how early they had to wake up for work. They also use this phrase to speak admiringly about someone who wakes up early.

“I'm just sitting here, watching the bamboo sway back and forth in the breeze.”

“The question is whether his leg is fully recovered.”