Lessons Once upon a time, there was a kingdom...

“Once upon a time, there was a kingdom ruled by a kind and beautiful queen.” 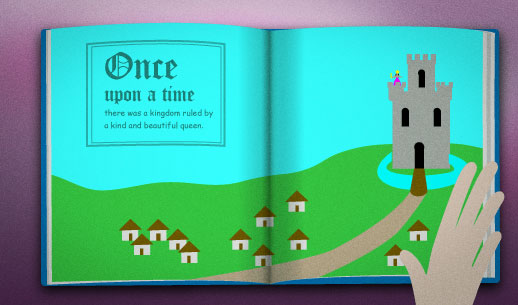 You're reading a children's book to your child. It's a fairy tale. This is the first line of the book.

Once upon a time, there was a kingdom ruled by a kind and beautiful queen.

Once upon a time

This is a set phrase that children's fairy tales and story books start with. It means "one time" and suggests that the story happened a long time ago.

(someone) ruled a kingdom

Someone with complete power over a place "rules" it. This is usually a king, queen, emperor, etc.

In modern days, you don't say that a president or prime minister "rules" the country that they're leaders of. That's because presidents and prime ministers don't have complete control; they have to follow certain rules and laws, and the citizens of the country can have them replaced.

Because of this, you should remember these phrases:

The word "kind" means "nice" and "not cruel". However, you don't hear it used much in daily conversation. People do use "kind" in some set expressions, like:

How kind of you.

Be kind to animals.

However, it sounds a little strange to describe someone as being "kind" in everyday speech. There are a few reasons for that:

“I'd like to cash this. Do I need to fill out a deposit slip or anything?”