Lessons There's this nosy lady next door who'... 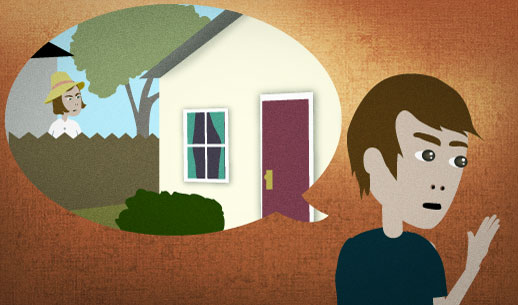 You have a neighbor who always wants to know about you. You're describing this situation to some people at a party. You say this.

There's this nosy lady next door who's always in our business.

A "nosy" person is someone who wants to know private information about other people. It has a negative association, because "nosy" people are annoying.

People that are often "nosy" include neighbors and family members.

A person who's "next door" lives in the house or apartment right next to yours.

Have you met the guy next door?

(someone) is in (someone's) business

Being "in someone's business" means getting involved in their personal lives.

For example, if you've tried to learn or give advice about a person's:

This is why, when someone is getting too personal, you say:

Get out of my business!

“You're such a goofball!”