Lessons You'll pass a coffee shop on your rig...

“You'll pass a coffee shop on your right. Right after that, veer off to the left and you'll see it on the left side of the street.” 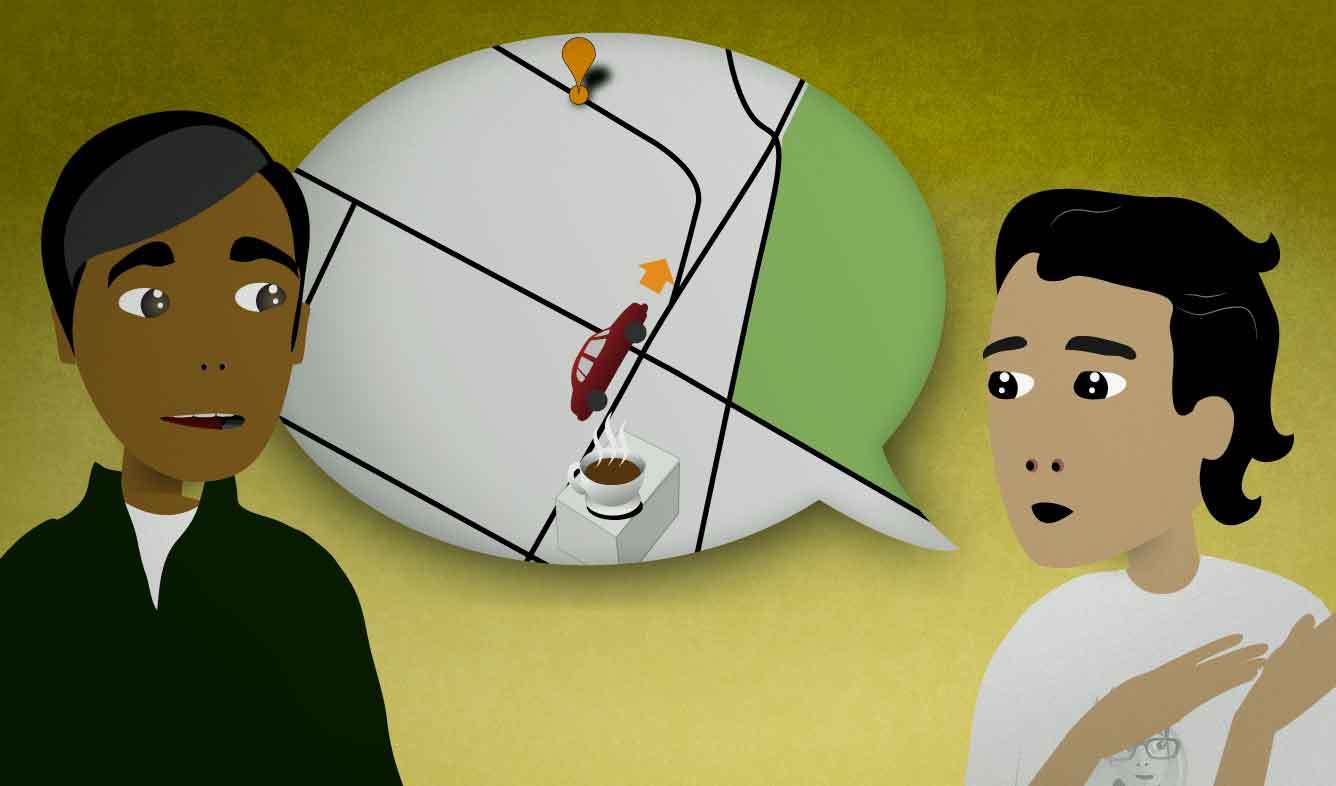 Your sister and her husband are visiting you from out of town. Your brother-in-law wants to go to a drug store and needs directions. You're telling him how to get there. You say this as part of your directions.

You'll pass a coffee shop on your right. Right after that, veer off to the left and you'll see it on the left side of the street.

you'll pass (something) on your (right/left)

This is a phrase to use when you're giving directions. Use it to tell someone what landmarks they should expect see when they're driving or walking somewhere. These landmarks let the driver know if they're going the right way.

Drive in that direction for about 15 minutes. You'll pass a big pond on your right. After that, there'll be a stop sign.

Go down 14th street for 4 blocks. You'll pass a Shell station on your left. Look out for Montgomery St. Take a left on Montgomery and it's the 4th house on the right.

veer off to the (left/right)

To "veer off" means to turn slightly.

Telling someone to "veer off to the left" is different from telling them to "turn" to the left. "Veering off" means turning at an angle of about 45 degrees. In a car, a "turn" usually requires you to stop, but "veering" doesn't.

The word "veer" can be used in other situations as well. It's not just for cars. Storms can also "veer off":

They were expecting the hurricane to hit the South Carolina coast, but it veered off and didn't hit until Virginia.

When someone drives their car off of the road accidentally, we say that they "veered off the road":

Barry fell asleep at the wheel, veered off the road, and crashed into a telephone pole.

Since "veering off" means that you're not going straight in one direction, people use it to describe things that are not happening in the way that was expected, like a conversation:

The conversation suddenly veered off into the topic of birth control.

"Right after" means "immediately after". You can talk about something that happens "right after" something else:

Right after I left his apartment, I got a call from him and he told me to come back.

When you're describing how to get somewhere, you can also talk about a place that is "right after" another place:

Our house is right after the third stoplight.

the side of the street

In English, streets have "sides". You can talk about:

the left side of the street

the right side of the street

the other side of the street

walking on the side of the street

something that is sitting on the side of the street

giving someone directions will 日本語 after
Print this Lesson

“As the Earth orbits around the sun, the angle at which sunlight hits the Eart...”

“Dave is in charge of the entire East Coast sales team.”