Lessons OK, OK. No need to get all melodramatic. 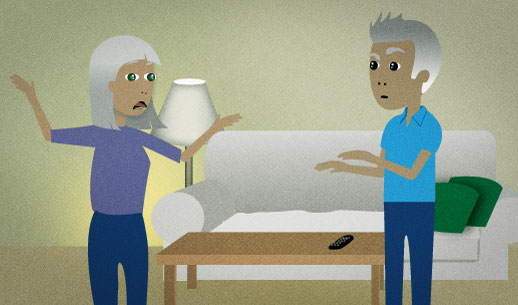 Your daughter has told you that she's going to quit school. Your wife gets really upset and says that your daughter's life will be ruined. You're not happy either, but you don't think she should get upset. You say this.

OK, OK. No need to get all melodramatic.

Say "OK, OK" when you want someone to calm down. For example:

You especially use "OK, OK" when someone is really worried or angry.

No need to (do something)

No need to apologize. It was an honest mistake.

No need to explain. I understand completely.

In casual speech, putting "all" in front of an adjective can make it sound more negative. Use it to talk about things that you don't like or that annoy you. For example:

Don't get all impatient.

She likes to act all shy when you first meet her, but within ten minutes she'll be talking your ear off.

No thanks. Sunscreen makes my skin feel all oily.

You can even make positive descriptions sound negative using "all":

Why are you being all nice to me today? Do you want something from me?

A "melodrama" is a kind of story that has very dramatic, extreme events and emotions. Characters in a melodrama do things like

Calling a real person "melodramatic" means that you think that they're acting too emotional. A "melodramatic" person acts like they're on stage in a play, even when they're living a normal life.

calming someone drama emotions get OK 日本語
Print this Lesson

“Gosh, I feel like I'm turning into a grumpy old man.”