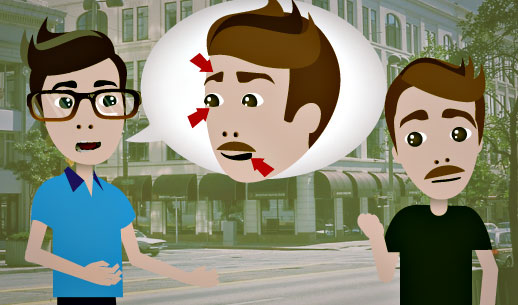 You and a friend are having a discussion about the way that young people tend to prefer text messages, email, and social media instead of direct conversations. You told your friend that you think face-to-face communication is best. This is how you explain why.

You're able to convey subtle nuances.

(someone) is able to (do something)

To "be able to" do something means that you can do it.

The word "convey" means to "carry". But it's usually used to talk about getting across messages, information, feelings, etc. between people:

Her eyes conveyed a sense of loneliness and despair.

I think the movie was meant to convey the idea that, no matter how hard you try to be independent, everyone needs to rely on the people around them from time to time.

"Nuances" are very small differences between things. A good example of this is a person's facial expressions. When someone is happy, they smile. But people also smile when they're nervous. The difference between the two kinds of smiles is an example of a "nuance".

The meaning of "subtle" is very similar to "nuance", but "subtle" is an adjective. So when you put together "subtle" and "nuance", it means really, really small differences between things.

So what can kinds of situations do you talk about "subtle nuances" in? This phrase is useful for talking about communication, ideas, art, and so on:

There was a subtle nuance in the way that she said it that made me think that something was wrong.

Our English teacher does a really good job of explaining the subtle nuances between words.

Looking at a painting in person is a totally different experience. You're able to pick up on lots of subtle nuances in the color, the brush strokes, and so on.

The word "you" doesn't always mean the person who you're directly speaking with. Sometimes it means "people in general" or "anyone".

Here are some examples of "you" used in a general way:

You need a solid foundation in basic math and science.

In very formal English, you can use "one" instead of "you":

One is able to convey subtle nuances through face-to-face communication that are not possible to convey through other means.

“Dear Mr. Kent: I am writing to inform you that we have not yet received your ...”